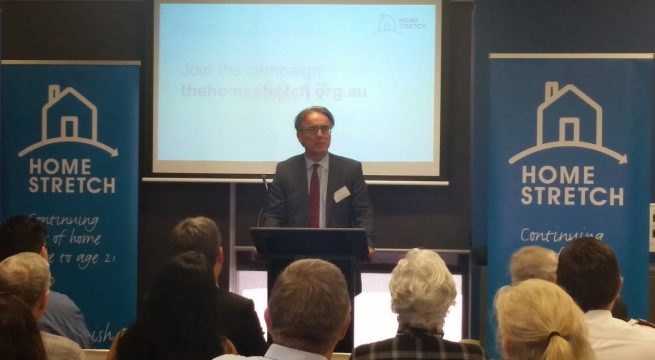 Western Australia can reduce youth crime, drug use and homelessness – and simultaneously save money – by introducing a simple change to out-of-home care.

This is the message in a new “Home Stretch” campaign to extend out-of-home care support from 18 to 21 years. The campaign is launched in Western Australia today.

The chair of the Home Stretch campaign, Mr Paul McDonald of Anglicare, said it was time Western Australia and other Australian States caught up with the rest of the world and stopped “evicting” children when they turned 18.

About 4000 young people are in out-of-home care in kinship care, foster care or State accommodation. They are usually vulnerable children from broken families or abusive or neglectful backgrounds. About 200 young people leave out-of-home care each year in Western Australia. Often this is because Government support to care-givers and case workers for the children are stopped abruptly at age 18.

Mr McDonald said the evidence from all over the world was that extending out-of-of-home care from 18 to 21 created dramatic improvement in homelessness, crime rates and education outcomes.

“New Zealand has done it. The UK and parts of Europe have done it. Canada and the US has accepted that 18 year-olds, especially those from a difficult background, are far too young to cut loose from the support provided by out-of-home care,” Mr McDonald said.

“In general society, young people are staying at home longer and longer for financial reasons, social reasons and the housing affordability crisis. But we stop support and funding at age 18 for those most likely to struggle to cope. It is no wonder these young people end up in trouble.”

Mr McDonald said a recent report from Deloitte Access Economics had nailed the argument and made the policy a “no-brainer”. The Deloitte report found that for every dollar WA spent on extending out-of-home care, it would save $2.17 through reduced costs of homelessness, fewer hospitalisations and fewer arrests.

“This is the first time these savings have been quantified and it shows there is no longer any excuse for delaying this important policy change which has been accepted by just about all other comparable democracies,” Mr McDonald said.

Mr McDonald said most of the 4000 young people in out-of-home care in Western Australia were mostly foster care and kinship care. The cost of extending the out-of-home care support would be $5.1 million per year.

But the benefits would be $11.5 million a year, according to the Deloitte report. This means there is a net benefit of $6.4 million.

Apart from the economic benefits, there are enormous community benefits in better relationships and social cohesion and inclusion.
Mr McDonald said: “The benefits also extend through the young people’s lives as they are better educated and better adjusted. Lifetimes of welfare dependency can be avoided. People will pay tax rather than collect welfare.”

Mr McDonald said Western Australia was suffering like all other States because of rising youth crime rates, homelessness and unemployment.

There are 10,000 homeless people in WA and the rate of youth homelessness has doubled since 1989. A quarter of the homeless are under 25. Senior police officers have said WA has the worst rate of methamphetamine use in Australia and youth crime gangs are the greatest threat to law enforcement.

Mr McDonald said: “Unfortunately young people who have had traumatic or neglectful upbringings are more likely to be involved in crime, drugs, homelessness and dropping out of school.

“Out-of- home care can help keep them on track. But then we dump them into a dangerous environment when they are simply not prepared for it.

“Extending care is not just good policy. It is an absolute must to help protect vulnerable children in the modern social environment. And it’s a money-saver. We call it Home Stretch because it is vital we finish the job and not call it quits at age 18.”

More than 2000 individuals and 110 organisations have signed up to support Home Stretch. The SA Opposition recently announced it would back the extension of home care.