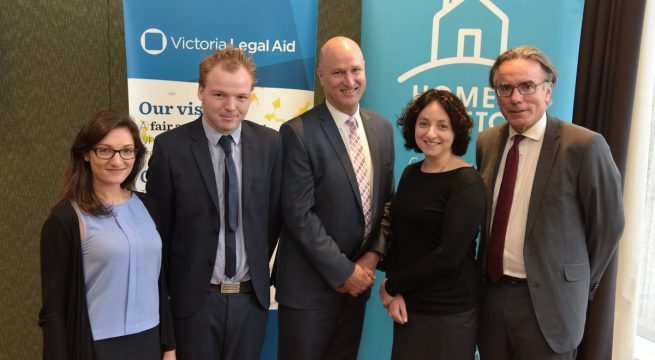 The State Government can reduce youth crime and homelessness with a single action that also saves money.

That was the message this morning (2 February) from the Chair of The Home Stretch campaign and CEO of Anglicare Paul McDonald, who called on the Government to extend the out-of-home care age limit from 18 to 21.

“The two big social issues in Victoria in recent months have been juvenile crime and homelessness,” Mr McDonald said. “And they can both be reduced by taking this simple action like the rest of the world has done.”

Speaking at the Victorian Legal Aid Breakfast for the opening of the Legal Year, Mr McDonald said that too many young people are falling into crime and homelessness because State care terminates at a chronological age of 18 years of age, rather than when they are ready for independent living.

“The current outcomes for these young people are disastrous,” Mr McDonald said.

“It is time for the State Government to act and show that it is not just police and prisons it is prepared to spend money on to respond to youth crime issues, but to invest in a proven and positive reform for our most vulnerable young people.”

“Frankly it’s time we woke up to ourselves and act as a responsible ‘state parent’, like other parents do, and give these young people the option to remain in a care placement until they are 21.”

There are about 55,000 Australian children in our-of-home care services, including foster care, kinship care or in residential care, mostly at the direction of State Governments who supply carer assistance and case management services which disappears once the teenager turns 18.

“Many of these children come from very traumatic backgrounds and they simply do not have the skills to suddenly flick the switch to live independently, find housing, get a job or continue their education,” Mr McDonald said.

Mr McDonald said the evidence from around the world was irrefutable. The UK, Canada, Europe and most of the United States have introduced extending care to 21 years and found that keeping children in extended care to that age will reduce youth arrests by 30%, youth homelessness by 50%, teenage pregnancies by 38% and alcohol and drug dependence plummets with this group.

In Australia, where State care ends at 18, 50% of young people leaving care will be in prison, homeless, pregnant or chronically unemployed within the first 12 months.

Mr McDonald said that the Australian landmark Deloitte Access study, Raising Our Children: Guiding Young Victorians into Adulthood, shows up to a $2.69 return for Government on investment for every $1 dollar if the State Government extended care from 18years to 21 years.

The study found that arrests would be down from 16.3% to 10.4%; hospitalisation would be decreased, from 29.2% to 19.2%; alcohol or drug dependence decreased from 15.8% to 2.5% and savings associated with housing costs have the highest overall benefit, with 42% of the total benefits.

Mr McDonald said: “Whilst there is so much concern on youth crime rates and youth homelessness here in Victoria, and the evidence so compelling, extending care to 21 years, is a no brainer”.

“According to ABS statistics, approximately half of 18 to 24-year-olds live with one of both of their parents. They have the option to remain in the family home. So why can’t we provide young care leavers the option to remain in care for longer? How can they be expected to navigate through the world at 18 years old with no safety net?”

Mr McDonald appeared at this morning’s event with Susan Baidawi, one of Australia’s leading social work researchers from Monash University and Dylan, a recent care leaver.