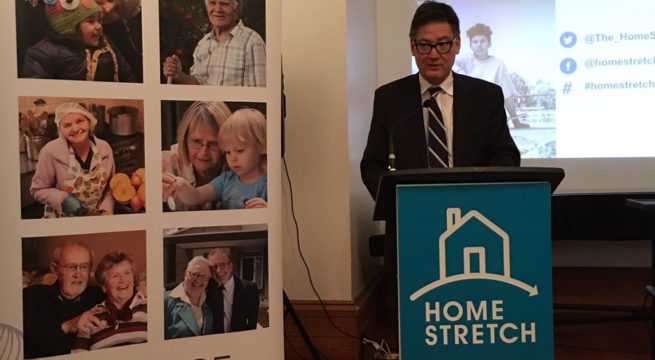 Campaign calls to extend support options for children in care

Giving children and young people the option to stay in care support until the age of 21 is the key aim of a campaign to be launched in South Australia by AnglicareSA today.
The campaign, called Home Stretch, is a national Anglicare initiative calling on State Governments to provide an option for youth in the out-of-home-care system to remain in care post the current leaving age of 18.
AnglicareSA CEO Peter Sandeman said every young person in care should have the right to remain in care until the age of 21, and then have access to quality post-care support and assistance to age 25.
“Currently, young people exit our child protection system when they turn 18. We know this isn’t the best option for most young people and they tell us that leaving care can be like entering a black hole, with no-one to turn to,” Peter said.
“What we want for South Australian children and young people exiting care is exactly what most parents and carers want for their own children and that’s access to the same opportunities and supports that other young Australians have.
“Some of these opportunities are available because young people have access to family supports and networks, which children and young people in care don’t have access to.
“Opportunities include access to supports and services such as housing, financial assistance, education, training and legal advice.

“The Liberal government has made positive commitments to extending family based care and supports for young people until they turn 21, however we believe this is only part of the change needed.

“Unfortunately under current and proposed legislation, the option for a young person to grow up with a range of support networks around them doesn’t exist, meaning some of the most vulnerable people in our community aren’t given the best chance to succeed in life.
“Growing evidence shows that we’re not doing enough to support care leavers successfully transition into independence, with approximately 63% of the homeless young having been in care and nearly 30% being unemployed.”
Extending the option of being able to access post care services and support until at least 25 years old has an extensive range of benefits to not only the young person, but also to the wider community.
“Deloitte Access Economics’ cost-benefit analysis shows a financial return to government of between $1.40 and $2.69 for every dollar spent in the continuation of care until the age of 21,” Peter said.

“A relatively small investment now will reduce significant social and economic costs in the future.”

Home Stretch will be launched at 10am on Monday, 3 April at Carclew, 11 Jeffcott Street, North Adelaide.