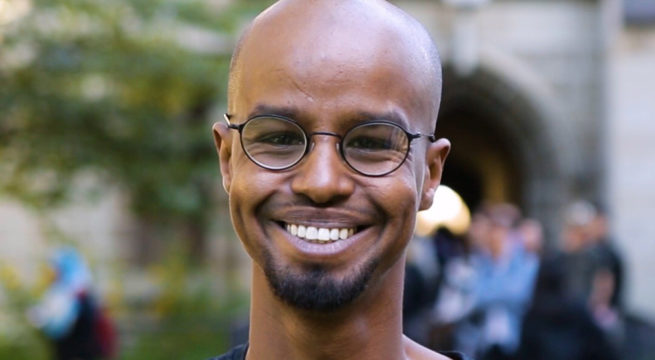 Ayub shares his story in The Big Issue

Throughout my years as a ward of the state in Victoria, I never found a place
to call home. When I was six years old, my mother and I came to Australia as
refugees from Somalia. Shortly after we arrived, I was placed into state care.

My mum was incredibly young when she had me and given the trauma that we suffered in Somalia, the turmoil of the Kenyan refugee camps we lived in and the intensity of our journey to Australia, I now understand why she wasn’t ready to be a parent.

Because of the custodial agreement between my mum and DHS, I wasn’t able to be placed in a foster care home permanently. This meant that I spent a lot of my time in residential care; a place where kids who have been removed from their families, and don’t have other family or a foster care family to live with, are housed together under adult supervision.

Instability, uncertainty and disruption became the hallmarks of my childhood and adolescence. I lived in eight different foster homes and many more resi care placements. The longest I ever spent in one place was just over a year.

To this day, I find it difficult to feel settled; and calmness always feels out of my reach. I was amazing at sports when I was younger – full of potential and bursting with talent, the teachers would always say. I felt the happiest and most connected to the kids around me when I was out playing sports. But because I was a ward of the state, being able to compete at events was impossible. There was no-one to sign my attendance permission slips, to take me to sports carnivals, or help me pay for my sports equipment. It’s really upsetting to think of all of the opportunities I missed, including being part of the Victorian state hockey team.

I’m extremely grateful to all of the families and people who opened their homes and hearts to me, but there was always a sense of belonging missing from my life. Maintaining any connection with my culture and background while I was in state care was extremely difficult. I never met any other person of colour while I was in care, and all of my foster families were very white. It was isolating to be the only black kid, and I never had the chance to speak to people whose story and background were similar to mine.

I was evicted from state care and became homeless before my 18th birthday.

Not many people know that in all Australian states, except Tasmania and South Australia, we cut off all kids in state care, including those living with a foster care family, when they turn 18.

For me, and most other kids like me, that means no ongoing emotional or financial support.

No case manager. Nothing.

Within one year, 35 per cent of these kids will become homeless. While most of my friends were celebrating their 18th birthdays, finishing high school, or getting their driver’s licences, I was trying to figure out where I was going to sleep that night and searching for my next meal. It felt like a nauseating spiral with no end.

The extreme sense of anxiety, social isolation and fear I felt as a young homeless man was terrifying. These were meant to be some of the most memorable and formative years of my life. Instead, I was just trying to make it through each hour and each day desperately holding onto what was left of my sense of pride and self-worth. That got harder the longer I was on
the streets.

There continues to be a crushing stigma around young homeless people, that it’s somehow our fault we don’t have a roof over our heads. That we have a criminal history or substance abuse issues. That we’re out of control and dangerous. But most of us have suffered trauma, neglect, abuse – homelessness is just the result of it all. For me, there isn’t a “family” to turn to when something goes wrong.

I was really surprised that so many other kids I met on the street had state care backgrounds; just like me they had nowhere else to go. Breaking the cycle of homelessness when you’re young and don’t have a support network or stable income is almost impossible. How can you go for job interviews when you haven’t showered or eaten? Even if we get jobs, which landlord would want to give a 12-month lease to an 18-year-old with no rental history or references?

The barriers to having a normal life were enormous for me. Thanks to the tireless assistance of a social worker, I was able to break the spiral after three years, and secured a room in a commission flat.

I’m so proud of how far I’ve come with my life. I’m 30 now, and I have a home, full-time work that I love, friends that feel like family, and I feel confident enough to make plans for the future. I’m also a proud ambassador of the Home Stretch campaign, which is fighting to extend the age of state care in Victoria from 18 to 21, as it has been in places like the UK, US, Canada and New Zealand. I’ve had to fight my whole life, and I’ll continue fighting for this.