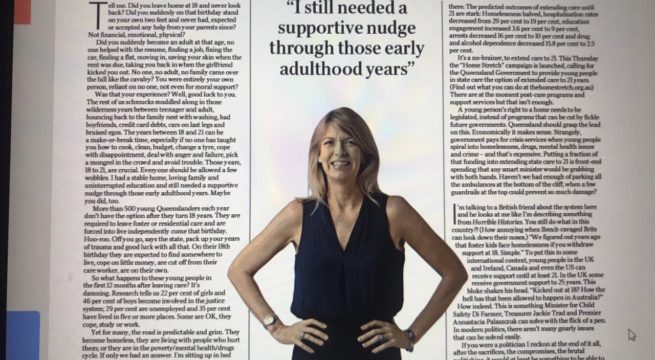 The kids who must grow up at 18

Tell me. Did you leave home at 18 and never look back? Did you suddenly on that birthday stand on your own two feet and never had, expected or accepted any help from your parents since? Not financial, emotional, physical?

Did you suddenly become an adult at that age, no one helped with the resume, finding a job, fixing the car, finding a flat, moving in, saving your skin when the rent was due, taking you back in when the girlfriend kicked you out. No one, no adult, no family came over the hill like the cavalry? You were entirely your own person, reliant on no one, not even for moral support?

Was that your experience? Well, good luck to you. The rest of us schmucks muddled along in those wilderness years between teenager and adult, bouncing back to the family nest with washing, bad boyfriends, credit card debts, cars on last legs and bruised egos. The years between 18 and 21 can be a make-or-break time, especially if no one has taught you how to cook, clean, budget, change a tyre, cope with disappointment, deal with anger and failure, pick a mongrel in the crowd and avoid trouble. Those years, 18 to 21, are crucial. Everyone should be allowed a few wobbles. I had a stable home, loving family and uninterrupted education and still needed a supportive nudge through those early adulthood years. Maybe you did, too.

More than 500 young Queenslanders each year don’t have the option after they turn 18 years. They are required to leave foster or residential care and are forced into live independently come that birthday. Hoo-roo. Off you go, says the state, pack up your years of trauma and good luck with all that. On their 18th birthday they are expected to find somewhere to live, cope on little money, are cut off from their care worker, are on their own.

So what happens to these young people in the first 12 months after leaving care? It’s damning. Research tells us 22 per cent of girls and 46 per cent of boys become involved in the justice system; 29 per cent are unemployed and 35 per cent have lived in five or more places. Some are OK, they cope, study or work.

Yet for many, the road is predictable and grim. They become homeless, they are living with people who hurt them; or they are in the poverty/mental health/drugs cycle. If only we had an answer. I’m sitting up in bed the other night reading the socio-economic cost benefit analysis by Deloitte Access Economics commissioned by Anglicare a few years ago (and you thought I was out clubbing every night), and it’s all there. The predicted outcomes of extending care until 21 are stark: Homelessness halved, hospitalisation rates decreased from 29 per cent to 19 per cent, education engagement increased 3.6 per cent to 9 per cent, arrests decreased 16 per cent to 10 per cent and drug and alcohol dependence decreased 15.8 per cent to 2.5 per cent.

It’s a no-brainer, to extend care to 21. This Thursday the “Home Stretch” campaign is launched, calling for the Queensland Government to provide young people in state care the option of extended care to 21 years. (Find out what you can do at thehomestretch.org.au) There are at the moment post-care programs and support services but that isn’t enough.

A young person’s right to a home needs to be legislated, instead of programs that can be cut by fickle future governments. Queensland should grasp the lead on this. Economically it makes sense. Strangely, government pays for crisis services when young people spiral into homelessness, drugs, mental health issues and crime – and that’s expensive. Putting a fraction of that funding into extending state care to 21 is front-end spending that any smart minister would be grabbing with both hands. Haven’t we had enough of parking all the ambulances at the bottom of the cliff, when a few guardrails at the top could prevent so much damage?

I ’m talking to a British friend about the system here and he looks at me like I’m describing something from Horrible Histories. You still do what in this country?! (How annoying when Brexit-ravaged Brits can look down their noses.) “We figured out years ago that foster kids face homelessness if you withdraw support at 18. Simple.” To put this in some international context, young people in the UK and Ireland, Canada and even the US can receive support until at least 21. In the UK some receive government support to 25 years. This bloke shakes his head. “Kicked out at 18? How the hell has that been allowed to happen in Australia?” How indeed. This is something Minister for Child Safety Di Farmer, Treasurer Jackie Trad and Premier Annastacia Palaszczuk can solve with the flick of a pen. In modern politics, there aren’t many gnarly issues that can be solved easily. If you were a politician I reckon at the end of it all, after the sacrifices, the compromises, the brutal politicking, it would at least be something to be able to look back at your career and think, I did this one thing and it changed and saved lives.