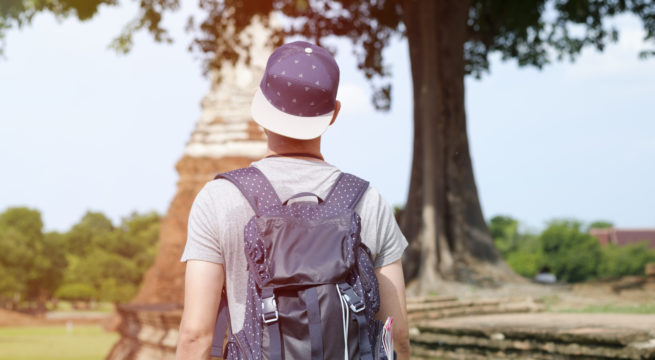 In all Australian states and territories, young people in out-of-home care get shown the door at 18. Planning to leave care starts as early as 15, regardless of whether the young person feels they are ready to leave the support they have in care and move out on their own.

Children in out-of-home care have already lost one home, having been

removed from their natural parent/s often due to neglect or abuse. The loss of care at the age of 18 compounds the losses that many young people in out-of-home care have experienced in their home lives. As James, a care-leaver, says: “I would say that leaving care was thrust upon me. I didn’t want to leave care; obviously you want all the support you need, all the support you can get.” (Gill and Dew, 2017).

This expectation on young care-leavers to support themselves once they turn 18 sits in contrast with the experience of most young people who rely on family support as they enter adulthood. The vast majority of 18-21 year olds still live at home (HILDA, 2017), and many that do leave have the safetynet of a family home, where they can ask for help or return to if they need to. A recent Australian study found that 63% of parents would let their adult children move back home (O’Brien, 2016). There is no such support available for young people who are leaving state care. Around 3000 young people ‘age out’ of out-of-home care each year. When young people ‘age out’, they lose a right to a place they can call home once they turn 18; they also lose financial and emotional support.

In the context of the disrupted experiences of home that almost all young people in out-of-home care have experienced, the option of extended care could help them establish a safe and secure foundation on which they can build their lives (Gill and Dew, 2017). Otherwise, what we see is a child protection system that lays down a trap for the people it is designed to protect, taking away the security and support that young people need as they transition into adulthood.

Dylan is a 23 year-old care-leaver who we interviewed for this piece. He described how, since the age of 12, he has been “… constantly moving from place to place”. Currently he is living at a friends’ house while his friend’s brother is in lock-up. Dylan’s understanding of home is one he would share with many; a place that signifies stability, security and a sense of belonging. Dylan says:

What home would mean to me is a place that I know I can return to each night, and feel cared about and really own that space, because without a place to call home, we will all struggle.

Dylan’s description echoes the findings of a recent study on young people’s experience of home (Natalier and Johnson, 2014). Participants described five dimensions of home: shelter, emotional well-being, control, routine, caring relationships and stability. The imagery young people used drew upon the cultural ideal of a home as a haven and the domain of relationships and practises that signified stability, routine, control, care and the emotional well-being associated with belonging and feeling ‘at home’. Descriptions of sitting still, having a garden, listening to music, looking at their belongings, cooking, cleaning, having pets, being with their families and staying put (Natalier & Johnson, 2014, pp135). We know that many young people leave care and do well. They continue training or education, develop healthy relationships and get on with adulthood. However, 50% will end up homeless, unemployed, in jail or a new parent within the first 12 months (Raman et al, 2005).

HAVING A SAFE AND SECURE HOME

For young people that we know will struggle with the transition to adulthood, having a place they call home can set them up for life. Safety and security is key for young people leaving care to build their lives into adulthood. Having stability means young people will have the space to focus on their education, gain employment and establish themselves within their communities (Gill and Dew, 2017. The stability that home provides is both physical and social. Social stability may not be as obvious, but it is also key to young people leaving care feeling secure and having ongoing access to social support. A New South Wales study found that the longer young people remained in their placement after leaving care, the more positive their overall outcome was (Cashmore and Paxman, 2006). “Translating stability in care into felt security, and into ongoing social support, is through and the continuity of relationships, acceptance and the normality of these young people’s daily lives – and continuity that does not end on their 18th birthday (or before).” (Cashmore and Paxman, 2006 pp239).

Key to the stability and security is the importance of continuing relationships young people have developed with their carers and other key people in their lives. As explained by Ashley, a care-leaver, the three main struggles for young people leaving care include: a lack of financial support, as they might end up homeless; a lack of relationships, as they are often without someone to turn to; a lack of sense of belonging to community (CBC News, 2017). In addition to the stress young people are faced with when leaving care, there is an added pressure of not having stable relationships, nor a community to belong to and nowhere to go if things do not work out as planned; these are unreasonable expectations thrust upon this cohort. A startling 57% of care leavers felt unsafe in the area where they first lived after leaving care (Gill and Dew, 2017).

Especially in the context of such disrupted experiences of home, young people in state care need the option of maintaining their connections and support to navigate their journey into young adulthood and establish a home of their own. It is crucial that we ensure a more gradual and flexible transition is provided for young people leaving state care that reflects what they need from home.

PROVIDING AN OPTION FOR EXTENDED CARE

“For young people leaving care, the term ‘care- leavers’ can be misleading. In reality, these young people are ‘care-losers'”

For young people leaving are, whether they are ready or not, the term ‘care- leavers’ can be misleading; in reality, these young people are ‘care-losers’. Care is lost but their needs and vulnerability remain and in many cases are multiplied by this loss of care (Fenton, 2017).

In the United States of America, Canada, the United Kingdom and most recently New Zealand, care is being extended to 21 years. In both the United Kingdom and United States there have been direct outcomes when care is extended, with homelessness rates halved, education participation rates doubled and an increase in the likelihood of full time employment for this cohort (for further reading see: Courtney, Munro and The Costs and Benefits of Providing Extended Care & Maintenance to Ontario Youth in Care Until Age 25).

The United Kingdom initially extended care to 21 years for those in foster care placements, following positive outcomes with the introduction of Staying Close, for those young people leaving residential care. Staying Close is a process where young people leaving their residential homes at 18 can move in to a home that is close to their previous home. This is to ensure that connections and relationships are maintained and support is nearby. Many young people can return to their  residential homes for Sunday dinners, to get their laundry done or just for a chat with their support workers (Narey, 2016).

As Cashmore and Paxman (2006) wrote, “Stated simply, relationships are the ‘active ingredients’ of the environment’s influence on healthy human development.” Relationships assist us to define who we are, what we can become and how we are important to other people, and so extending care offers the opportunity of extending relationships, which can be the key factor in creating positive pathways to independent living (SOTF 20165). Cashmore and Paxman (2006) also found that young people that had one placement for at least 75% of their time in care were more positive about their time in care, less mobile and had better outcomes.

For far too long our state care system has had double standards when it terminates care for young people in state care at the age of 18. Australian parents know that their job as parents is to see the raising of the child through to the end. Parents don’t usually quit the parenting job during tough times, or three quarters through, and they certainly don’t quit just because their child turns 18. States and Territories and legal guardians need to follow suit.

To call for this change, a campaign called Home Stretch has been established. Home Stretch seeks all state and territory governments to provide young people with the choice to continue their care, if they choose to, until the age of 21.

Extending out of home care until the age of 21 will give thousands of young people the additional guidance they need to have a real shot at life.

Courtney, M. E., Dworsky, A., Peters, C. M., and Pollack, H. (2009) Extending Foster Care to Age 21: Weighing the Costs to Government against the Benefits to Youth. University of Chicago.

The Office of the Provincial Advocate for Children & Youth. (2012). The Costs and Benefits of Providing Extended Care & Maintenance to Ontario Youth in Care Until Age 25.