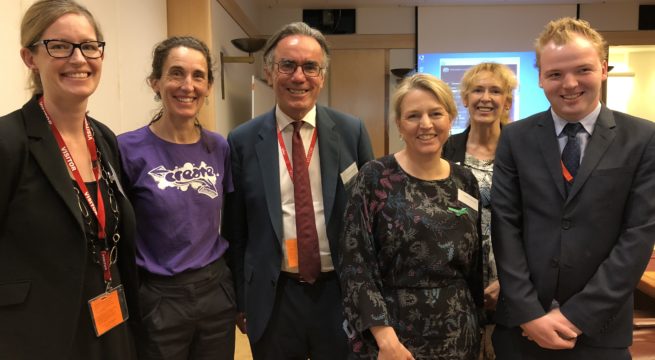 This afternoon I want to talk about the Home Stretch campaign. Mr Acting Deputy President Sterle, I wonder how old you were when you moved out of home. I wonder how old many of my fellow senators were when they did. It was not unusual in our youth to move out at a reasonably young age, but that is not the norm today. And I doubt, Mr Acting Deputy President, that your daughters moved out of home very quickly. I’m sure they hung on as long as they could while they could do their university education with all that love, care and support from your wonderful family around them.

I did actually leave home to go to university at the age of 18—at least I tried to. I got myself a flat with some friends. You know, it was slightly dysfunctional—they were great friends, but I don’t know that it was the wisest idea, and about three days into it I crashed my car and my mother said to me, ‘Look, Louise; this really isn’t going to work.’ She sorted me out and she sent me off to university college. I spent the next few years moving between home and university college.

So I always had the support of my family and a home to go back to on weekends, holidays or whenever I needed it. But young people who are in the out-of-home care system in Australia do not have this option. Government support for out-of-home care ends at age 18, which means that these young people are left with little support and few options. So I was really pleased today to host a briefing on the Home Stretch campaign here in parliament with my colleague Senator Cameron. This campaign is asking governments around the country, including the Commonwealth government, to facilitate national reform to continue the option of state care until the age of 21.

In our briefing today I heard a really inspirational story from a young man named Dylan, and it’s really important that we listen firsthand to the experiences of young people when talking about these issues. He lived in out-of-home care from the age of 12, and I was really moved to talk to him about his personal story. He moved in to out-of-home care because the school found him sleeping on the school oval because he could no longer go home. So that’s when his intervention started. He was with a foster family for a short time and moved between residential care houses. He’d been working with the department on a live-in care plan which involved moving from Melbourne to Queensland to be with his father, who he’d only just found and begun contact with.

Right before he was due to move out and move to Queensland, these plans for him fell apart. And the department, of all things—and this is not an unusual situation—told him that he should start looking for homeless shelters. He didn’t have any other options. He was luckier than most. He was offered transitional housing, but then at the age of 21 he was homeless again. He spent most of the next two years homeless, sleeping on couches, jumping between different mates’ houses and, in the short-term, as he explained it, accommodation in terms of sharing and boarding with people that simply did not feel safe for him.

It’s not surprising to know that these circumstances made it very difficult for Dylan to find a job. I’m really pleased to say that Dylan, now almost 24, talked to us about how he’s finally found his feet. He’s worked hard to secure rental accommodation and he has a really good job, and I was just so inspired today to hear how well he’s doing. But too often we have from the Turnbull government a solution that simply says, ‘Just get a job.’ What Dylan told us firsthand is that it’s simply too hard to get a job without a decent education, which is really hard to get without stable housing. How wise of him. You can’t get a job without a roof over your head, if you don’t know which suburb you’re going to live in from one week to the next and if you’ve got to spend your day working out where you’re going to live next. He also told us very firmly that he believes he would have been able to find a home and work much sooner if he’d had more support and a stable home. Despite all the challenges in his life he has managed to change his story, and I really want to commend him for that.

Dylan’s challenges are not unusual. The latest homelessness survey by Swinburne University found 63 per cent of homeless young people are care leavers. So Dylan’s story is probably one of the better ones, and that’s alarming. The reason he’s able to tell his story is because he’s finally on his feet. But we know, devastatingly, that more than half of care leavers end up unemployed, in jail, or as a teenage parent within the first 12 months of leaving state care. It’s no wonder, without the support that they need. Can the parents here imagine it? Children or young people do not very often leave home at 18 anymore, and if they do, they’re always welcome to come home to do their washing and for a friendly ear. Imagine losing the support of a case worker you’ve relied on for guidance and support, not to mention that in their 18 years many of these young people have experienced trauma beyond what we can even imagine. Many of these young people are still at school when they turn 18, and I cannot imagine the stress of having nowhere to live and having your state care end while you’re still doing your year 12 studies.

The Home Stretch campaign is advocating for change. It’s really important to see that in the United Kingdom, Canada and even in the US, foster care continues until the age of 21. The outcomes are absolutely amazing: halving homelessness rates from 39 per cent down to less than 20 per cent; slashing drug and alcohol dependence from 15.8 per cent to 2.5 per cent; tripling education engagement from 3.6 per cent to nine per cent; reducing hospitalisation and arrests; and massively improving mental and physical health. Reforms like this have a long way to go in reducing the intergenerational disadvantage that we know is precipitated by life in out-of-home care. Deloitte Access Economics have done a cost-benefit analysis on how it might play out in an Australian context and found that the Australian government would see an average return on investment of $2.13 for every $1 spent. It’s an absolute no-brainer.

I really want to thank Paul McDonald, CEO of Anglicare Victoria and chair of the Home Stretch campaign, for taking the time to brief my colleagues on this issue today. Some might say: ‘What’s this got to do with the Commonwealth? The foster care system is not our business.’ But the simple fact is that when people move out of home at 18, if they do not have any other income and support, it is the Australian taxpayer that is responsible for the welfare support for those people, responsible for Commonwealth rent assistance and responsible for youth allowance. If we don’t get right the life start that those young people need, then their prospect of employment and a positive life future is diminished. So this should be very much on the Commonwealth’s agenda. When young people turn 18, if we want them to stay in state care and have the states pick up ongoing responsibility for that continuity of care and continuity of placement, then the Commonwealth needs to be at the table.

Finally, I really want to thank Dylan for his bravery and his advocacy, for standing up for a better life for other young people like him. Surely these people—some of the most vulnerable young people in our nation—deserve our support and care.