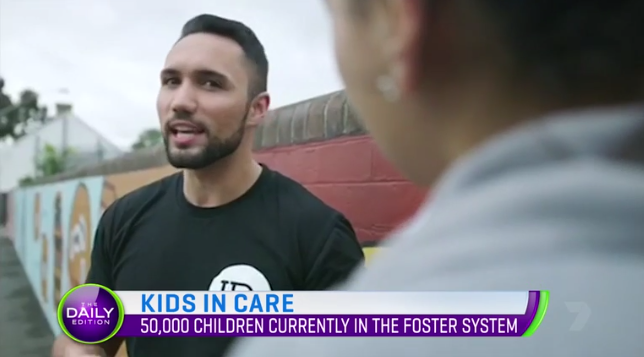 In Australia, there are currently 50,000 children living in out-of-home care.

“I was monitored by the system at two-months-old, and was a ward of the state until I was 18-years-old,” Dawe said.

“I was told by my carers that I would never amount to anything in my life (and) that I belonged in jail, just like my parents.

“I grew up with extreme disadvantage – days where the foster carer would leave me and my younger sister locked out of the house with nothing.

“All I ever wanted as a kid was a sense of belonging. That’s why we need more Aboriginal people to become carers.

“Culture gives you that sense of belonging in your life, and if we had more Aboriginal carers out there supporting these young fellas and enabling that, then that’s amazing. That’s what I wish I had.”

Giving hope to others

Isaiah was inspired by his experience to create ID Know Yourself, an indigenous-led organisation that delivers a culturally-focused, trauma-informed mentoring program for young Aboriginal people within the out-of-home care system.

By reconnecting these young people to culture, and preparing them with essential life skills, the program aims to support young people to become strong and resilient men and women.

“One young girl in particular, she’s 16, and she wasn’t attending school – her attendance rate was 34 per cent – she was abusing drugs and alcohol, she didn’t have any purpose or direction in her life, she wasn’t working.

“After 11 weeks, she has a 100 per cent attendance rate, she hasn’t touched drugs or alcohol, her bail conditions have been lifted, and she’s now got purpose and direction – she wants to become a lawyer.”

Working with Isaiah is 7NEWS reporter Bryan Seymour – who also grew up in the foster care system – and argues that care needs to be provided beyond the age of 18.

“Adoption is a failed model of the past,” Seymour said.

“It is an option for some people – but really, foster care, kinship care and guardianship are the big ones for the future.

“More than 50 per cent of kids who leave care today will end up homeless, in the justice system or in the welfare system. One-third of the girls are pregnant and the rates of suicide are eight times that of the general population. It’s the most disadvantaged cohort of young people.

“Isaiah and I both got a letter on our 18th birthday – and there are lots of kids who are turning 18 this year – and when you get that letter, it says, you’re on your own – good luck. It’s like being thrown off a cliff.

“We need to extend the age of care until 21 to give these young people, who are still children, the chance to develop the skills to survive in adult life if they don’t have the family support network.”