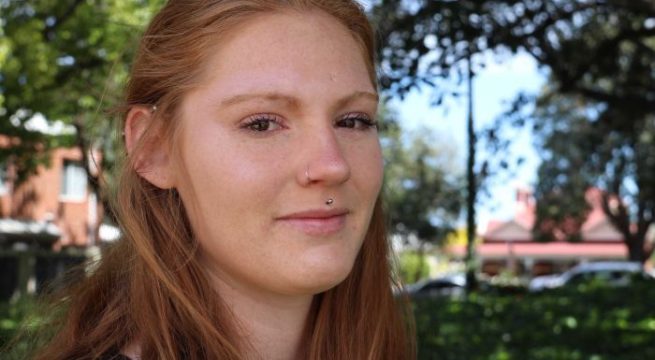 Lily Williams was taken into state care at the age of six and was placed with a lot of different families and institutions over the years.

Each time she was moved, she felt traumatised, like nobody wanted her and she did not belong.

That feeling stayed with her when she was released from state care as an adult and abruptly found herself on her own.

By her 18th birthday, she was in hospital after trying to take her life.

“My home at that moment was the hospital. And that’s not a home for anybody.

“I’d struggled with addictions with alcohol and drugs. And I felt I was just left to fend for myself.”

Desperate, she turned to Western Australia’s Department of Child Protection, the institution that had been responsible for her care for most of her life.

“I remember calling up on the Monday, the department, and saying, ‘I’ve got nowhere to live’. And they said, ‘You’re out of care, call this number’ … which is Crisis Care, and that number isn’t going to help you.”

An auditor-general’s report released in August this year found the State Government was lacking in its obligations to help young people leaving its care find somewhere to live, tap into education and find a job.

It found most were not receiving any or enough support, “putting them at higher risk of being homeless, unemployed, missing out on education and training, and not getting the physical and mental health care they need”.

In response to those findings, the McGowan Government has announced it will begin a trial to extend the age limit for young people living in state care from 18 to 21.

It would not be compulsory, rather there would be the option of ongoing support if the young person wanted it.

The Government would work with Anglicare to develop the trial and test it at several locations across Perth over at least six months.

Child Protection Minister Simone McGurk said it would be extended if successful.

Each year more than 200 young people leave state care in WA, but according to Anglicare 75 per cent of homeless young people have been in state care.

“They have so much more need for support and ongoing help to make it, in a really brutal life that they have had, so it’s imperative that we support these young people,” Mr Kaas said.

Extended state care already exists in the United Kingdom, parts of the United Sates and New Zealand, while several Australian states are also preparing to adopt the system.

In the UK, Anglicare said this halved homelessness among the affected young people, they were twice as likely to be in full-time education, and a higher percentage were in full-time training and employment at age 19.

There were similar results in the US.

Mark Glasson, director of services at Anglicare WA, said young people who had been in home care were also at higher risk of arrest and drug and alcohol dependence, but this could also be reduced with more support.

The program would cost approximately $25,000 per youth, per annum.

But Anglicare estimated that for every dollar invested there would be $2.17 return in savings or increased income.

The CREATE Foundation, which advocates for children and young people who have lived in out-of-home care, has long campaigned to extend the leave-care age to 21.

Chief executive Jaqui Reed said young people preparing to transition from care were one of the most vulnerable groups in society.

“Young people who turn 18 should have the choice to remain in the care system and in a supportive family environment with their carers financially supported to maintain the placement,” she said.

Ms Williams was also supportive, but distrusted government care and wanted any extra funding for leaving care services given to not-for-profit groups.

“I think that would work if it’s the right kind of support,” she said.

“I personally don’t think the department is the right kind of support.

“Those workers are overwhelmed and can’t do their jobs to the extent that they need to already.”

Ms Williams eventually found help from a not-for-profit mental health agency, which gave her a place to live after leaving state care.

She is now studying to be a mental health support worker at TAFE.