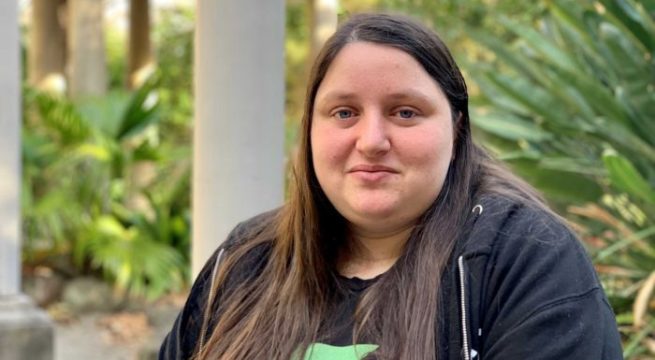 Natasha Anderson, 23, was once moved between foster homes 17 times in a single year.

“Once people have had their fill of you they don’t want you anymore.”

After nine years in care, Ms Anderson’s situation changed for the better as she moved into a new foster home, one she left only six months ago.

The child protection system effectively cuts off young people in care once they become an adult.

Because of the extra time she was able to spend with her foster mother, Ms Anderson counts herself as one of the lucky ones.

“It meant that I could actually be a normal teenager, and that’s something that I hadn’t had for a very long time,” she said.

“For a lot of young people, all support just drops off at 18.”

The system also creates difficulties for carers, who no longer receive financial and other supports.

Katie Hooper, from the Foster Care Association of Victoria, said it was tough when children came of age.

“I think for Victorian foster and kinship carers, the children stay,” she said.

“It’s just the pressure increases so that the carer doesn’t have the supports they require.

“Of course they keep the child or young person, if they can, in their care, but financially it’s a real strain, or a stress.”

A program launched by the Victorian Government is changing that, with care to be extended until young people reach 21 years of age.

The $11.6 million trial will support 250 young people over five years, giving those in foster or kinship care the choice to remain, and supporting young people in residential care to find alternative housing.

The Home Stretch advocacy group has been pushing for care to be extended, and chairman Paul McDonald said Victoria’s move was historic.

“For the first time the State Government has recognised that it has a formal responsibility to continue to care for young people in state care past 18,” he said.

Home Stretch cites figures showing half of care leavers end up homeless, unemployed, in the criminal justice system or becoming a new parent within the first year on their own.

Mr McDonald said cutting off supports because a teenager became a legal adult left them vulnerable.

“The only reason that a young person has their care terminated is based on a birth date, it’s not based on their circumstances. It doesn’t matter if they’re not ready to go or they could have some issue going on in their life, that they’re not ready for independent living,” he said.

“They’ll be great outcomes out of this, and we know there’s more young people who will need this.”

PHOTO: Paul McDonald chairs The Home Stretch campaign, which advocates for the care leaver age to be increased to 21. (ABC News: Aneeta Bhole)

Victorian Child Protection Minister Luke Donnellan said the trial model was about getting the settings right.

“We’ll do the assessments and the like, and then obviously I, in the future, hope we can keep pushing this along and hope that it’s a more universal service in the long run,” he said.

But while The Home Stretch celebrated the beginning of Victoria’s trial, it has continued to call for action elsewhere.

The ACT provides carer subsidies until a young person is 21.

Tasmania is also planning to extend care, while South Australia will continue reimbursements for foster and kinship carers until young people turn 21.

Western Australia has committed to a six-month trial, while the Northern Territory, Queensland and New South Wales were yet to act at all.

“We’re calling upon both sides of [politics], Bill Shorten and Scott Morrison, to adopt this when they come into the federal election,” he said.