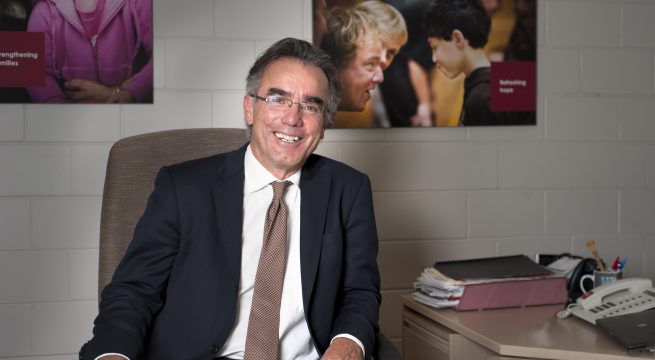 It was not the number of placements that made Kevin* angry about his time in care, it was that he was informed that he had to leave his placement three months before his 18th birthday. No reﬂection on his time in care, no good wishes for the future and deﬁnitely no ﬁnancial handshake to get established in the big world out there. After 14 years being cared for by the state, the end came quickly, via a letter advising him that his time in care is now at an end and if he needed further assistance, listed were a few phone numbers of places who could help.

Such is life for the many in care systems around Australia who are required to leave state care before they turn 18. There are more than 44,000 children and young people living in out-of-home care in Australia. They receive legal protection, formal care and assistance from the state only until they turn 18. It is estimated that at least 3,000 young Australians nationally each year are shown the door as they turn 18.

There is now a large body of literature that document the poor life outcomes experienced by an inordinately high proportion of young people having their care terminated before 18 years of age. The relative disadvantage experienced by this group spans from both a history of abuse and neglect, poor mental health and broken relationships, inﬂated by experiences from associated out of home care ‘environmental impacts’, such as case worker disruptions and occasional placement changes.

For the young care leaver, their traditional support structures such as family, community membership and peer groups are more likely to be not visible or operative, culminating in limited social support individuals can leverage to cope independently as an 18 or 19 year-old. In many cases this disadvantage can be exacerbated over subsequent generations.

Australian research is now showing consistently that these young people have high rates of homelessness and lack the social, emotional and domestic skills needed to live independently.2 One study found that within 12 months of leaving care 50 per cent are unemployed, in jail, homeless or a new parent,3 while the Swinburne survey of 400 homeless young people found that 63 per cent were from a care background.

The differences in care pathways between children in out of home care and those resident in traditional care structures are highlighted in the abrupt and instituted end of formal state care at the ages of 16 to 18. The end of formal state care for the young person means that all ﬁnancial, social and emotional support being provided at an important stage of life is ceased.

A number of studies have considered the relative impact of models reparing youth for departure from state care, with all reporting mixed approaches and mixed results. Regardless of ﬁndings, the question remains, whether young people

15 to 18 years — who have already faced challenging life circumstances have sufﬁciently developed independent living skills at an age where their peers are afforded the option to continue growing and staying in place rather than experiencing the disruption of moving and the discontinuity of immediate rather than gradual independence.

There have been a number of calls to consider extension of care.

The ﬁndings from the extensive 2012 Victorian Vulnerable Children’s Inquiry recommended that the State should allow the option of extending care to some young people clearly not ready to leave care alone in the world.

The recent Senate report into out of home care highlighted that those leaving care are struggling to cope independently. It suggested that the outcomes are so demonstrably poor that Australia should consider extended care options to soften the landing for the young people in their transition from care to adulthood.

It is true that not all wish to remain in care past the age of 18. Some young people cannot wait to take off and go after a life in care. They want to get out of the place, maybe try it again with family, take off to some imagined arrangement, or start life again anywhere else. However, many of these scenarios melt down after a few months. And for those who do not want to go because they are not ready, or think they are ready but quickly find out they are not, exiting care can have catastrophic consequences.

The Australian Bureau of Statistics have found that the average age of leaving home in the general population is 24.7 years. This may be in part economically driven, as costs of living are often beyond the earning capacity of a young adult, but it is also driven by current science that now shows normal adolescent maturation is not completed until young people are into their early twenties. At 18 the prefrontal cortex of our brain is not yet fully developed; this is the part of the brain that helps us to inhibit impulses and to plan and organise our behaviour to reach a goal. Sending a young person willingly out of care at 18 could be seen as psychologically beyond their capacity.

Despite the ‘locis parentis’ expectation, we operate our care system with a double standard. We will support our own children through their transition to adulthood, recognising the necessity of the ‘home inputs’ even if they are no longer a minor, whereas children cared for by the state will be abandoned on a calendar date, regardless of capability or functionality.

There is currently no jurisdiction in Australia which provides children in state care the option of accessing formal care and support beyond the age of 18. Internationally, however, there are examples of jurisdictions that have extended care to the age of 21 and in some instances to the age of 25. Such studies have reported benefits extending beyond the individual, to social and economic benefits experienced by the community and the state. Such benefits reported include reduced engagement in crime, halving of youth homeless rates and higher rates of participation in education and employment for this cohort.

Overseas governments have realised the brutality and abruptness of finishing care for children at 18 and are turning around disastrous outcomes. The United Kingdom have legislated for young people to have the option to remain in their foster care placements until the age of 21.  In Scotland, the government widened these arrangements to the trickier residential care services where there can be even more complex scenarios to solve. The United States, thanks to Federal Government intervention, now see over 20 states providing extended care provisions — while Canada has extended care provisions universally across all state care systems. International evaluations to date have shown that homeless rates have halved  and educational engagement  rates have doubled providing further compelling evidence to governments to ‘stay the course’ and finish the (corporate) parenting job off for this cohort.

This is why a group of concerned organisations and community citizens and have established The Home Stretch campaign, to  highlight the need for Australian child welfare systems to move to introducing extended care provisions for those young people not ready to make it. As part of this Anglicare Victoria has commissioned Deloitte Access Economics to undertake a socio economic cost and benefit analysis of Australian care systems to ascertain what outcomes would be derived for the individual and for the State if care was provided as an option until the age of 21.

The Home Stretch recognises that to raise the child out of care into a successful and achieving adult we have to provide some of these young people with extended care transitionary arrangements that enable them to remain in their foster care placement or an alternative supported independent living arrangement in order to finish the job like any other parent would. Without such provisions the extensive investment in the child while they were in care will in the main go to waste.

The ability to extend the care placement has been long felt as the missing piece in the state care continuum. Until we have an extended care option available for any of the 3,000 young people who leave our care system each year, our Australian child welfare system will continue to let down these young people when they need it most.